Picking With the Legendary Alan Munde 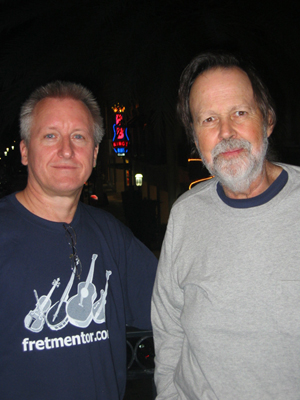 Its not often that you get to sit down and pick a tune with banjo legend Alan Munde.  On January 27, 2012, prior to Fretmentor's 3rd Annual Workshop, Alan and I (accompanied by Elliott Rogers of the Alan Munde Gazette) sat down and picked a couple of tunes.  One of the tunes we played was Dear Old Dixie, a song by Flatt & Scruggs, which was later transcribed in a version by Alan and played by him for many years.  I studied that tab that Alan wrote and played it over the years.  Here we are some 30-40 years later and I finally had the chance to play the song with Alan.  Here it is:

This banjo duet includes me playing the first and third breaks and Alan Munde playing the 2nd and 4th breaks.  I hope you enjoy it as much as I enjoyed playing it with Alan Munde.